Thoughts on Prestige Classes and Other 3isms in Classic D&D 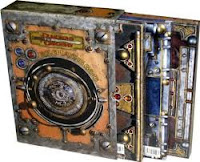 I'm not sure if I've touched on this in the blog or not - maybe back in one of the first posts. I've played D&D in one form or another since '81.  Moldvay ==> 1E ==> 2e from middle school through college.  After that I no longer played tabletop, having no regular group to get together with.  I continued to get my RPG fix via video games, both PC and console, playing "real" D&D games when I could, and eventually played and enjoyed Bioware's Neverwinter Nights I & II. Those two games in particular were based on the 3.0 and 3.5 rulesets - my only experience with either one.  When my then-too-young daughters expressed interest in playing then after seeing me do so, I took the opportunity to introduce them to the tabletop RPG - I mean, who among us would miss that window?

Seeing that 3.5 was too complex, I thought back on my own gaming history and without hesitation realized I wanted the old box set I started with so many years ago as the tool to teach them the game.  A bit of internet research led my to RPGNow and PDFs of the Mentzer basic and expert sets - Moldvay/Cook was not available. That was, what, almost 5 years ago now, and one of the girls still plays.  A weekly BEMCI game I run, and she's recently started playing 4E with friends from school. Turns out one of the teachers runs a 4E game club and the kids are also playing it on their own.  Awesome. 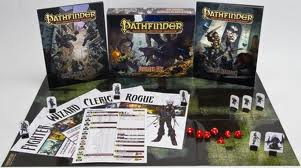 So where is all this going, you ask?  Well, here's the thing. I've found myself firmly settled into the Classic family of D&D - whether B/X, BECMI/RC, Labyrinth Lord or whatever.  For the level of rules crunch I enjoy and have time to commit to memory, those games hit the sweet spot.  But to be honest, if I was a teenager again and had the all but unlimited time to game I did back then, I'd be all over 3.5, or rather Pathfinder now.  All those options and reams of fluff would be heavenly.  I always loved (and still do) reading game books nearly as much as fantasy fiction. It's a bit of a shame that the kids are playing 4E rather than Pathfinder since it would give me an excuse to blow the $35 on a Pathfinder Beginner Box.  I'd love to read it.  I had bought a 4E Starter Box out of curiosity over Essentials - I gave her that to use since I never will, having read through it already.

Damn it - get to the point man! Prestige classes? 3isms?

Ok, ok... Despite not wanting the full level of crunch that 3.5 has to offer, it still have plenty of offer my game.  Skills and feats, races and classes, monsters and magic: these can all be mined for ideas that I can simplify and use in my game. One idea in particular, though, really interests me - prestige classes.  As far back as 2008 was was looking at them and wondering how to incorporate them.  Not just 3.5 style classes, but 2E kits and other "advanced" options for non-standard class choices.  A year ago, the ever prolific map-maker Dyson Logos - who shares scads of other great content on his blog beyond the maps - did a series of  posts on "Glantri-style" prestige classes. The Glantri Gazeteer for Mystara introduced a system of specialized sub-classes - specifically schools of magic - and Dyson took that concept and showed how you could easily use to to introduce any prestige classes you wanted into your game in an amazingly elegant fashion.

I want to use this as the basis for adding some things back into my game.  The RC had a wonky system for Paladins, Knights, Avengers and Druids - being something you could switch to after 9th level.  Interesting idea, but too limiting for my taste.  Cue Glantri as a way to use some of that without creating full class progressions for them.

I can see using the system to add in paladins and knights as specific orders or organizations for fighters or clerics, schools or magic as originally used in Glantri and many other things. Some I'd like to do eventually:


Let's show the much-maligned Prestige Class some love, shall we?  It's not that bad an idea old-schoolers!