Map Scaling or How Big Is This Place?

Even before I starting working on the Caldera map, I was struggling a bit with the question of scale. If one looks to the gold standard of hex mapping - the Mystara/Known World maps from the Gazetteer series - we see that TSR used a few scales, primarily 72, 24 and finally 8 miles per hex.

If you are unfamiliar with these awesome maps, I'll point you to The Piazza, and the archive of maps lovingly recreated by Thorfinn Tait.  Go check them out, I'll wait... Good?  Then I'll continue.

Starting with the island continents I presented in the last post, I spent quite a bit of time zooming in and out, playing with the hex templates from Welsh Piper.  I had a few issues I wanted to hash out: how big, overall, should Caldera be? What combination of scales let's me zoom from a reasonable "atlas" view down to Regional and Campaign Area maps? I knew I wanted my "standard" to be 6 mile hexes rather than the 8 mi of the Mystara maps, having been convinced of the utility of that scale by a number of good articles around the web, which I am too lazy to find and cite for you right now.

Here's where I ended up.  First is a new overlay on the mapgen island graphic, scaled to 150 miles per hex, rather than the 300 I shared previously.  I can then take individual islands and map them in Hexographer at 30 mi/hex - a 5:1 zoom. That's analogous to TSR's 24 mi maps. Eventually, I can puzzle them all together to recreate the world map overview at 30.  From there, I can use the Child Map feature of Hexographer to do another 1:5 zoom and get my Regional maps at 6 mi/hex - right where I want to be.  If I want to zoom in one last step for campaign maps, I can go 6:1 and have 1 mile hexes. There is also the option of the Judges Guild hexes that are 25:1, I think, for really close zooms. 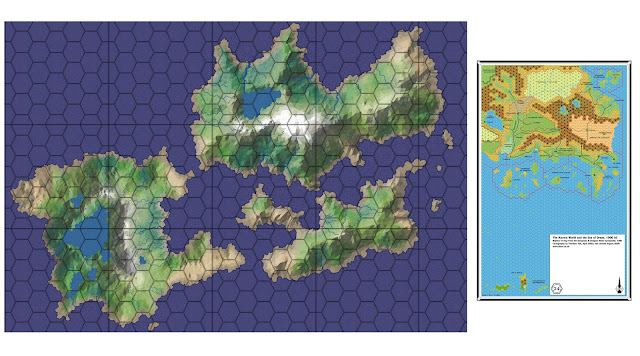