So, for something a little different and fun this weekend, we took a day-trip to NYC to get in a little shopping and culture.  It was a great little get-away from the day to day here in Central New York.  My wife and older daughter took the opportunity to hit SoHo and Chelsea Market and get their shop on.

My younger daughter and I took a few hours to see Tutankhamen and The Golden Age of the Pharaohs.  It was actually our second time, since we saw it when it was the Field Museum in Chicago.  It was absolutely awe-inspiring to see the amazing quality and detail of the artifacts even ignoring the gold everywhere.  It just boggles the mind to think that these things were made 3300 years ago.  Just gorgeous.  Walking through the exhibit, one can't help filing away little gaming ideas.  I did the same thing last spring when we went to see the National Geographic's exhibit on the Chinese terra cotta soldiers.  I love museums.

That's about it for now.  Hope everyone's gearing up for a happy holidays! 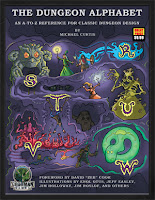 After the exhibition, we hopped on the subway and went to visit The Compleat Strategist.  I've been to NYC a number of time, but had never gotten down to this gem of a game store. It was just fantastic to see real honest-to-goodness old school gaming materials on the shelf of a real store.  They had multiple copies of the Swords & Wizardry Core Rules, as well as a single copy of Labyrinth Lord and the Advanced Edition Companion.  I didn't pick those up since I have my home-printed copies, but I did grab the last copy of Michael Curtis' Dungeon Alphabet.  It's gotten such great reviews on the web that for $10, I couldn't pass it up. It's on the nightstand now for bed time reading.  Woo Hoo!

Finally, I picked up a copy of Savage Worlds, also for $10.  I've read so much about it and if I had to play a non-D&D game system, SW seems like it could be the one.  Simple and quick to set up and play, elegant, it fits the bill for how I like to roll.  I'll be reading through it and I hope it reads as well as I expect.

This is simply a graphic response to the question posed >here<. I see 3 images in my head...

I started with Tom Moldvay's Basic set.  I love Erol Otus, but this Willingham pic is still my fave. 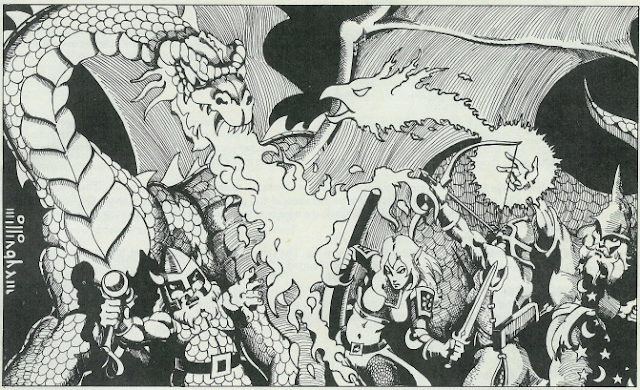 Then I moved on to AD&D.  Which means this: 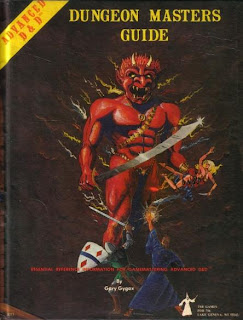 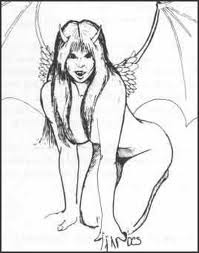 I've stayed away from RPG.net's forums section for the most part, since there is rarely anything on Classic D&D.  Lot's of 3e and 4e, but that doesn't help me much.  I do check in once in a while though, and stumble on some fairly interesting threads, including one this I found this evening where folks are discussing the merits of Race=Class.  You know: Humans get to be Clerics, Fighters, Magic-Users and Thieves, but Dwarves are Dwarves, Elves are Elves and Halflings are Halflings.  That's it.  No Dwarven Clerics. No Elven Thieves.


I think the Class concept is useful for modeling typical PCs. I don't think it's useful for modeling the way the fantasy world operates. Thus, the archetypical Elf adventurer is a F/MU, but that doesn't mean that all elves in the world are defined in terms of the Elf class. Similarly, the (Human) Cleric class is an archetypical adventuring holy-man/crusader: the kind of warrior-priest that is likely to adventure. That doesn't mean that all holy men or priests are defined in terms of the Cleric class, and it certainly doesn't mean that non-humans don't have holy men or priests of their own (it's just that they're not Clerics).

And further along, I found this from Yakk:

That pretty much sums up the whole thing for me.  Your typical demi-human racial adventurer fits that races particular view of what a hero should embody.  Each class is an archetype. Just like the 4 human classes are archetypes of what we humans see as heroes. If one wants to make additional class options for the demi-human races found in their campaign, by all means do so.  But take the time to make their choices unique to that race. After all, don't they deserve it?

I've already got my notes on Dwarven Runepriests (Runecasters, actually), but I need to work on some of those others. Anyone got some ideas of the others to share?

On Dragons and Ogres

I've recently begun playing in a quasi-Dragonlance campaign - run under the awesome B/X rules - and it has gotten me thinking about a few things within that setting.  Back in the day, that is late 80-s to early 90's, I devoured Dragonlance stuff.  Read the first two trilogies, had a couple of the modules, and being so long ago, I assumed I had forgotten most of it.  Well, guess what?  As I am playing the game, an amazing amount of the material is coming back to me.  Now, I don't intend to pull too much into Trevail, but these old memories have got the juices flowing, and there are some things to consider. 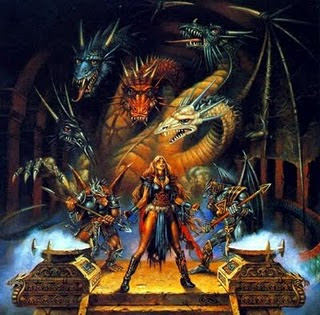 Remember this lovely "lady"? Takhisis, Goddess of the Evil Dragons.  Five chromatic heads of total bad-assness.  Now, she's not a Dragonlance original, no, but I was reminded about her.  Totally got to be used, in some form anyway.  Which brings us to dragons in general.

I believe that dragons have to be something special, and powerful.  Not just another monster to be slain without too much effort.  They are ancient, one of the first Great Races.  I also don't want them pigeon-holed by their stats in the rules.  Alignments are right out the door, to start.  Any dragon, as with any human, or elf, can be of any alignment - they are individuals of an intelligent race. That gold dragon may be controlling the local thieves guild, or advising the local priest of the Great God of All That Is Good.  You never know.  Same thing goes for the red dragon next village up the road. They come in all colors- chromatic, metallic, jeweled - and you'll have to take your chances with each one. 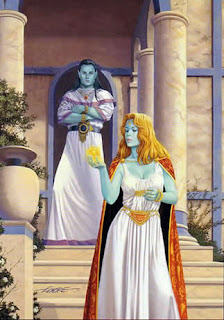 How about these guys here? They're the Irda - which I don't actually know much about, setting wise.  I do know they are "High Ogres", magical ones.  Are they good? Evil? Not sure, don't care. She doesn't look evil to me, but him? I plan on using these guys as my Ogre-Magi instead of those crazy Japanese ones in AD&D. How that works out I can't say yet, but I'm gonna have some fun with them, I can tell.

What else does Dragonlance have to offer Trevail?  How about intelligent minotaurs?  Not likely, doesn't work for me.  Kender? Gully dwarves? Not a chance. I do like the elven cultures - Silvanesti, Qualinesti, Kagonesti.  Maybe some bits there to work with. Draconians? Possibly.  Towers of High Sorcery?  In some form, yes. Between those and the idea of the White Tower and the Aes Sedai from Jordan's Wheel of Time, I definitely want magic somewhat controlled - at least in parts of the game world.

It seems like it's been a long time since I had any time to think about Trevail and what I want to do here.  Real life does have a tendency to rear it's ugly head, but lately I've been  thinking about it again and making some notes.  I'm pulling things together to start up a PbP game again, and got some inspiration for some things over at retrocyberpunk, too.  Time to actually write some stuff up and not spend so much time reading other peoples ideas.  Ya think?