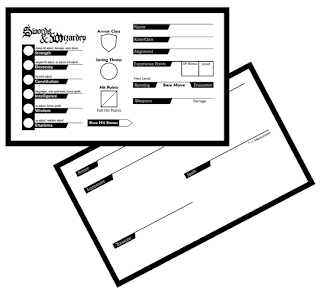 It seems that putting your "old school" character sheets onto index cards is all the rage nowadays. I think it's a great idea, what with them being so "stat light" and have seen some great ones.

In particular, my version was inspired by le bulette's and made use of the graphic elements in a full-sized sheet by Thomas Denmark at Original Edition Fantasy. Thanks again for letting me use those!

You can find the PDF here. And the editable Photoshop (psd) file is here. Help yourself if it's of any interest to you. 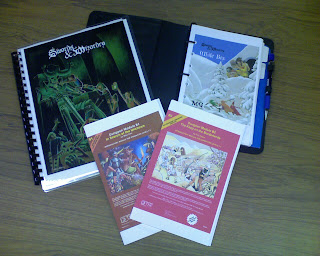 As I discussed in the previous post, I'm throwing together a "digest-sized" set of Swords & Wizardry White Box. The idea is to be able to take it on vacations, camping or wherever, and be able to play if the desire strikes.

At the right, is a pic of my setup so far - a digest printing of the WB rules, punched and put into a DayPlanner binder I had lying around. With it for comparison is my full-sized copy of the S&W core rules, comb-bound with laminated covers. It helps to work in an office supply store. (No NOT Staples.)

I've also copies of the Classic D&D Modules B1: In Search of the Unknown, and B2: The Keep on the Borderlands. Both printed up booklet style.

I found these great S&W index card character sheets (here) that fit right into the spirit of the kit.

And, based on another post in that sane blog (Thanks, bulette!), I need to make a little mini DM screen to pop in as well. Work, work, work!

I'll also be modifying his Labyrinth Lord 3x5 character sheet to use for my DM copies of character sheets and NPC sheets in my "regular" Classic D&D game.

OK, those last two posts are ones that I started back on May 31st and just saved the drafts as I worked on them. So, I finish and post both this afternoon, and the date stamp still shows May 31!

Don't you think they'd go onto the blog dated for when they were actually PUBLISHED?

EDIT: I actually searched the Help section and found an answer! The date defaults to when you first started the post, but it can be changed. Yay!

Got out the colored pencils and played with some coloring last weekend. I want to get an idea where the mountain ranges are and see the global view brought to life. After that, I'll zoom in on a smaller region and go at it hexmap style. 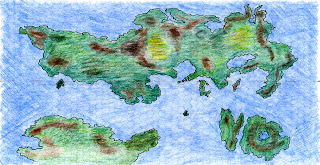 Just based on how this came out, there are already changes of course. The other "problem" is that I've been playing with putting this image into some software that lets you do proper cartographic map projections, and when it's projected onto a globe (orthographic view) I can see the distribution of the continents doesn't work at all. So, I need to move somethings about, and maybe do a bit of re-sizing here and there to get something that is more aesthetically pleasing.

Sidetracked! (or why do I do this?) 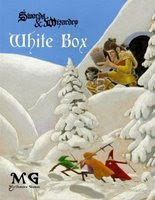 I've held off from doing much with Swords and Wizardry so far. Sure, I went and downloaded both versions so that I could look through them, but hadn't really done much yet. Unfortunately, I finally caved in to the hype and took a bit of time to read the White Box version.

Now, as I've noted, BECMI/RC D&D is my system of choice for an ongoing campaign and that won't change. I do want a bit more crunch in my base rules, but RC still gives me all the freedom to house-rule as I see fit. I've never played Original D&D, and never have seen a real, live set of those little brown books. So, when I had just skimmed through S&W on other occasions, I just saw rules variation that I didn't get. They weren't quite "right".

This time reading through it, something was different. Maybe I just was looking at it with a different mindset, I don't know. But what I saw was really cool - the simplicity just kicks rocks, and I can totally see using White Box for one-shot and pick-up type games.

What's it got going for it? Well, simplified mechanics, mostly. The whole "all weapons do d6 damage" thing, a single saving throw, very basic monster stats, index card character sheets. I have to say that for these quicky games, I'll even use Ascending AC. It's pretty simple to understand and use on the fly.

I plan to put together a little gaming package in a digest-sized DayPlanner binder that I can take anywhere - vacation, camping and so on, so I can pick it up and play with the kids for an hour if it rains. The WB rules, printed digest size, a single set of dice, and some adventure stuff.

What I need to spend a little time on is the adventure part. I want to put together a small 'sandbox" style setting to include in the kit. A map of the PCs home base village and the surrounding area, populated with mini-dungeons and set-piece encounters that will be found as they follow rumors or just hex-crawl around the map. That'll be the most time-consuming part, but I think it will be worth it. Once it's put together, I'll be sure to share.