For the past 5-6 months I have been running a game of Swords & Wizardry:WhiteBox for my kids and some friends.  Sadly, they made some poor decisions last night - their third session in Brave Halfling's fun little "Ruins of Ramat".  In general, the kids have done really well in their tactical decision making and have run when they needed to, to stay alive.  Last night, however, that all came to an end.  The tentacled demonic guardians (see right) proved to much and the party failed to escape.

In a way, this is a good thing, I think.  I started them out using the WB rules to simplify things since a couple of the players were newbies to tabletop RPGs.  My intention all along though, was to roll the campaign over to Classic D&D using the Rules Cyclopedia - my rules set of choice.  We'd discussed it recently and I was getting closer to doing some conversion work on their characters to start using the RC rules.  The TPk actually gives us a chance to start fresh and the kids have ideas for new characters they want to try anyway. At the same time, the discussion of PC choices and what type of game they want to play has allowed me to further develop my view of just what kind of game world Trevail really is and I have some grist for new ideas now.

A TPK isn't a bad thing necessarily - don't be afraid to use it for a new beginning and turn it into a win-win situation for the DM and PCs!

Below are some mock-up front and back covers for a supplement booklet compiling all my house rules and additions for S&W:WB that I use in my game.

Apologies to Mark Allan for ripping his artwork for the cover.  I do credit him inside. :-)  If I was to use this piece, I realize it could only be for my private use and if I shared this supplement on the blog here, it would need to be art free, or at least have artwork I have permission to use.

I've asked Matt Finch, the author and publisher of S&W about the legality of copying the "trade dress" i.e. cover design of his work and this post is primarily a way to show him what I would like to do.  That said, additional comments are always welcome! 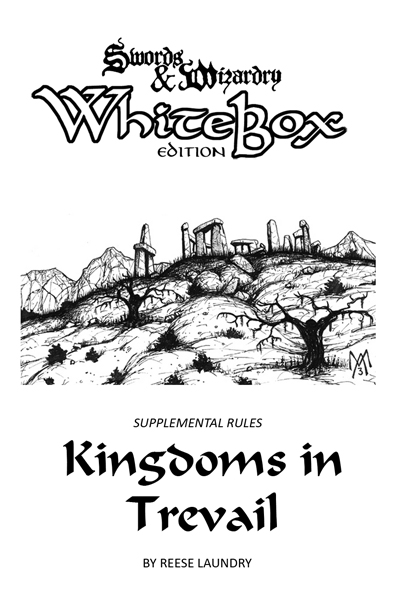 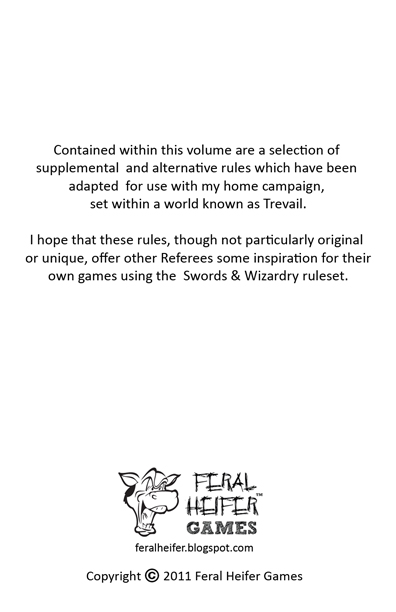 Posted by Reese Laundry at 2:39 AM 1 comments