I find myself spending way too much time perusing boards (RPG.net & Dragonsfoot mostly)for ideas rather than coming up with my own stuff. I'll read and read and read,and always get more ideas than I can ever use, and I LOVE IT! So there.

By the way, can anyone recommend others that have enough "Classic" content to consider? I know there's the OD&D Discussion board, but it really does focus on OD&D, which isn't quite my thing.

One of the things this blog will help me to do is, as I said, get those ideas on paper so that I can focus on incorporating the ones I decide to actually use. So, this post will be the first in a series, I imagine. As I poke about the interwebs and find "stuff", I'll put it here for further consideration.

Two for this morning. Discuss. 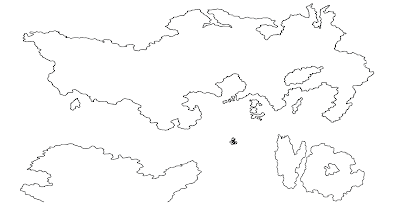 Here is the base for my world map. I've sketched out the continental outlines so I have a starting point, and can grow from here. I'm using the AD&D 2e World Builders Guidebook to some degree here. From this world view, I'll be roughing out the gross geographical features and climate patterns. Once that is done, I'll zoom into a smaller region that I can flesh out in more detail for the players.

My plan is to make classic Mystara-style hex maps initially, (OK, maybe not that nice), using the fantastic online utility Hexographer. Then as I feel artistic or more creative, work on redrawing everything more by hand, in the vein of the Tolkien Middle Earth maps, or Darlene's Greyhawk (1) & (2).

This map is a mash-up of a number of hand-drawn maps I made. I did 3 or 4 sketched maps, roughing out continental shapes, and scanned them all into Photoshop. I was then able to mix and match pieces I liked, rotating, flipping, shrinking or expanding, and so on.

What is Trevail? What do I want it to be? Every author asks these questions of himself as he sits down, pen in hand. I want Trevail to be a world that mirrors the aspects of fantasy that I have always found most interesting, and it will be drawn from many sources.

First off, my D&D is an older version of it. I started by playing Classic D&D by way of the Tom Moldvay Basic rules way back in...oh, '81 or so. Yes, I moved on to AD&D, then Second Edition. I never played 3e as a PnP game, but have been exposed to it via the videogame Neverwinter Nights. I've found that the game has grown so bloated and rules-heavy that I hardly recognize it anymore. Sure, there is a multitude of choices and endless character customization for the players, but it is too much for me - not the game I learned to play. As for the new 4e D&D? Well, that I really don't recognize as D&D anymore. Not the D&D that Gry Gygax wrote, anyway. When my children got old enough to show interest, I began to think about how to play with them. What needed to be simplified or otherwise modified so that they could understand what they were trying to do? I finally realized that the game I wanted them to play was the one I origianlly learned. It had changed, I know. The "Classic" rules had been revamped by Frank Mentzer: five new box sets had been released while I was playing AD&D, then merged into the Rules Cyclopedia. That tome was what I chose to play as I move forward. At least it will provide a place to start, and I will freely modify it to be the game I ultimately want to play. I think that is what D&D is all about. My world, my rules, my imagination at work.

Posted by Reese Laundry at 1:12 AM 2 comments

It isn't THE beginning, but it is A beginning...

For a player of Dungeons & Dragons - regardless of edition - there can be no undertaking more personal than that of creating your own world. For most it is a labor of love, and often a thankless task. We pour countless hours into these worlds: researching, writing, mapping, the list is endless. Everything we read can be a source of new inspiration. We constantly scribble little notes to ourselves when some new idea catches our fancy, and those notes are all seeds which often blossom into something new and wonderful within our ever changing, ever growing creation. For the most part it will mostly turn out to be nothing more than a creative outlet, never seen by our players.

World building is, for me, the most truly creative aspect of D&D. When we are actually gaming, we act more as an improv actor, and a referee. But when we are world-building, we are authors, artists and cartographers, historians, geologists and philosophers. We are the creators. As the world grows under our diligent labors, we bring to life a vision we have in our heads of where we want to be as players, filling it with whatever we desire.

And so, I present Kingdoms in Trevail, my personal creation. Right now it is mostly ideas rattling around inside my head, and scattered about in notebooks and on scraps of paper. I am building it for myself, and for my kids as well, so that they can play in someplace that is a part of me and not someone else's vision of a fantastic world. I'll use this blog as a place to get my ideas out of my head and onto "paper" so that I can begin to separate the wheat from the chaff. It will be a sounding board as I invite others to critique it or offer their own suggestions. I hope you can help me grow Trevail. I have lots of ideas, most of which likely won't make any sense, and perhaps seeing it through the eyes of others will help me get it all to fall more neatly into place.