Another crazy idea I don't have time for... 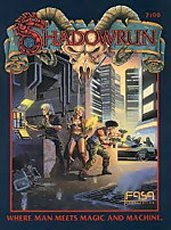 I hate it when I get an idea in my head and it WON'T GO AWAY. I always loved the idea of Shadowrun - and yes, I know a lot of people hate it just as much, if not more. But for me, the meshing of fantasy - magic & monsters, elves & dwarves - with cyberpunk - guns, cyborgs and virtual reality - just ROCKS. I played a bit on and off while in college. We were playing mostly 2nd Ed. AD&D and needed a break, so switched to Shadowrun for variety. We loved it, but the rules? Meh. Too much a change from what we were used to, I guess.

So now we fast-forward to 2009 and The Rise of the Retro-clones. The OSR is in full swing. I've fallen back to Classic D&D rather than the newer, more complex versions, and play around with Swords & Wizardry, too. Did I mention in an earlier post how much I love the simple elegance of S&W? I did, didn't I.

This is when the bug bites me. The OSR doesn't have a cyberpunk clone yet. Maybe it doesn't need one, but there it is. Obviously, somebody needs to write that puppy - so I'm stepping up. It will be a looooong process, I know, but I think it will be fun (mostly) and worth while in the long run.

Using Swords & Wizardry White Box Edition as my base, I need to first write a cyberpunk variation on the ruleset. Some of the things that need to be worked up include guns, cybernetics, computer hacking stuff, and some basic vehicle rules. For inspiration and research, I'm slowly working through the original - Cyberpunk 2020 - as well as Shadowrun (2nd Ed), GURPS Cyberpunk and even a bit of d20 Modern. I'm re-reading some William Gibson, too. Oh yeah, and watching Blade Runner at some point.


THEN, after the basic Cyberpunk/Modern rules are done, I'll need to put all that back together with the fantasy of base S&W. For the proper Shadowrun feel, I'll need to add in some additional new magic rules - most importantly Astral Space and a drain-based spell casting system.

So there it is. It will be a long, tedious process but I think it can be done. S&W has proven itself to be adaptable to other genres - look at Mike "MikeD" Davison's Ruins & Ronin, David "grubman" Bezio's X-plorers or Michael "chgowiz" Shorten's The Seige Perilous - Ultima RPG. There are also "in the works" things (poke around S&W's forums page) for a superheros conversion (Hideouts & Hoodlums), Westerns (Fantasy Wild West) and pulp science fiction (Anacreon Zeta). Some projects are further along than others, sure, but they still show the flexibility of the system.

Wish me luck! I'll be posting bits here and at the S&W forums for comments and vetting.

If anyone cares to comment, I'll initially ask one question. How should these rules be released? I see three options to choose from.
1) Offer the generic cyberpunk supplement (no magic or fantasy elements) first. It will be compatible with S&W, obviously, so people can add the bits they like from it into whatever modern or cyberpunk-esque game they want to run. Then follow that with the "full" Shadowrun clone version.
2) Offer it as a cyberpunk supplement and put in the magic rules in as optional, in an appendix or something.
3) Just go all out and do the thing as SR right from the start, with the fantasy fully integrated. People who don't want the magic bits can still use what they do like.